Banning F1 – does it make sense (environmentally and on cost)? 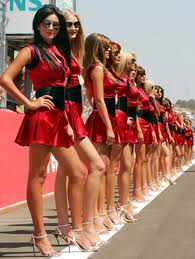 I was in Germany a few months ago and seen a copy of Handelsblatt  (a leading business newspaper) on July 20th last at a hotel bar. As you do, I scanned it while ordering a local beer (Moritz Fiege Pils). I noticed that the German Green Party wanted to ban F1 from the Nurburgring and Hockenheim. I read the article and it made me laugh to be honest. The reasoning was that the F1 circus is bad on CO2 emissions and all that stuff. Now a few facts first – I love motor sport, I am a management accountant, I like the old ways of doing things (now called environmentally friendly/recycling/grow-your-own) and I could not resist the picture of the F1 girls for this post.

But, being serious. Research and development expenditure is one of those things a management accountants might find hard to deal with. It’s normally a substantial cost, but the return is often uncertain. Now back to F1 and the German Greens.  Motor manufacturers like Mercedes, Honda and Renault (among others) have over time spend $billions on F1. And what do they get out of it? Well, every car nowadays has an EMU (Engine Management Unit) or “brain” that controls and monitors every thing a car does – do you know most cars have no accelerator cables at all; it’s a sensor on the pedal which the EMU monitors and the pedal is tensioned to give the feeling of a traditional pedal. Where was this technology perfected? F1 of course. And nowadays, F1 cars are lighter, faster, more fuel-efficient and even capture energy under braking (the KERS system). Surely this will pass on eventually to normal road cars, which will mean lower fuel consumption and lower CO2 emissions and so on. So, to bring it all back to management accounting. If we were to do as the German Green Party suggests, there would be no F1 in Germany (home of Mercedes), which might mean less research and development expenditure in F1, which in turn might halt the development of  more fuel and energy-efficient road cars for you and I.  Okay, it might be hard to put a money value on the benefits of F1 research and development in the long run, but it seems daft to try to ban it. So far, the history of F1 has shown us what the cars of tomorrow will have on board.  If that means efficient, energy harnessing cars for the future, we need to encourage it. The costs (monetary and environmentally) may be easier to ascertain and outweigh the benefits in the short-term. However, I can only see future benefits from F1 for car manufacturers who should be able to produce (in time), better, safer and more environmentally friendly cars for Joe Bloggs.  Kind of goes against what I thought any Green Party stands for to go against such progress. But, hey I am no politician! But it seems a classic case (from the Green’s view) of not looking at all costs and benefits of an activity over the long term.

One response to “Banning F1 – does it make sense (environmentally and on cost)?”